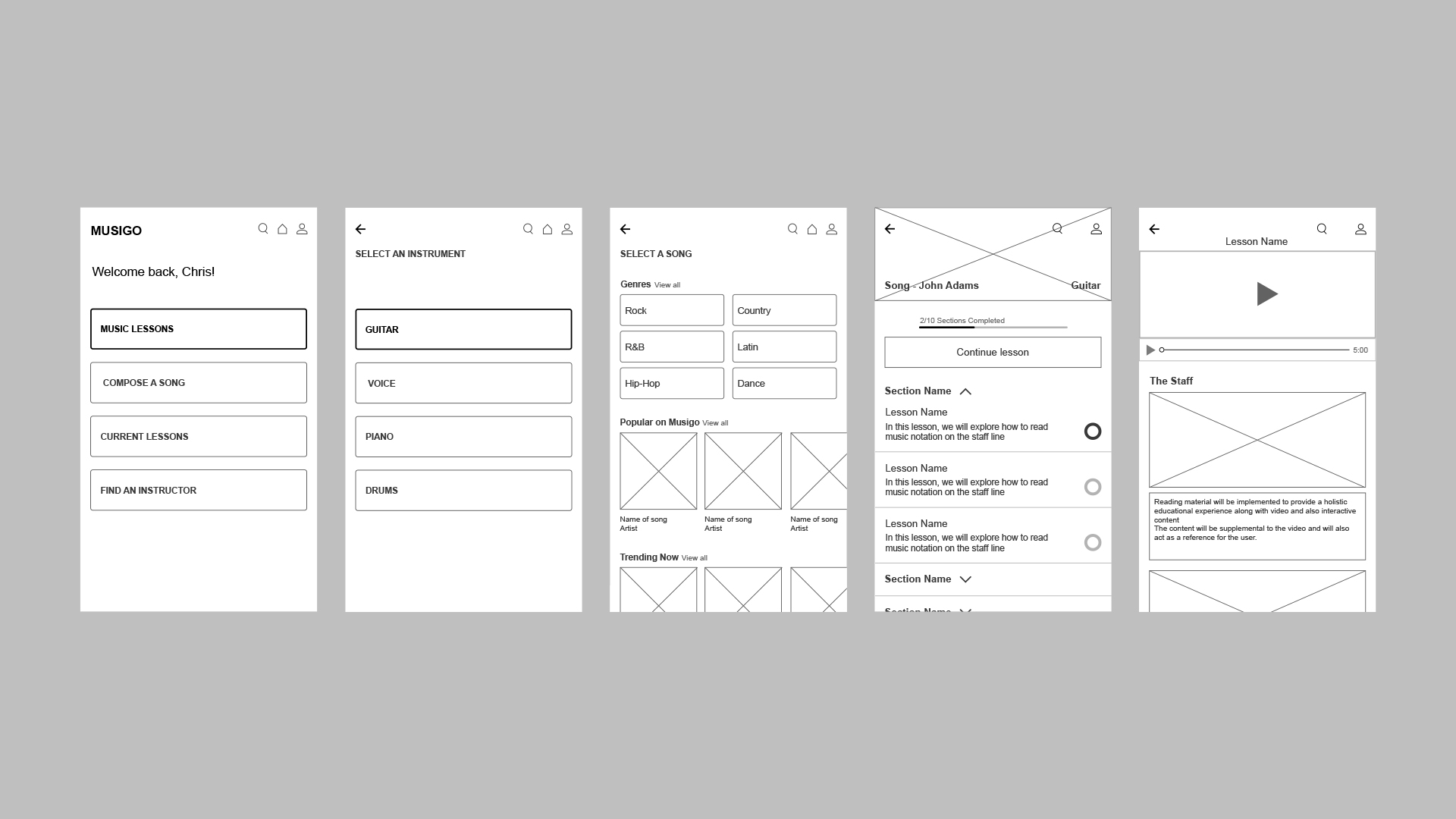 When
May 2019
my role
UX Design
Summary
Musigo is an app that allows you to follow your passion for music by providing a structured curriculum utilizing your favorite song, or any song! Pursuing a passion in music can be difficult due to time, cost, and resources. By using a familiar song to learn the fundamentals of music, Musigo aims to make music education easy, inexpensive, and stress-free.

My objective was to understand what a day-to-day schedule of the users was like and what method of learning a new skill was most effective for them. These two factors would allow me to empathize with my users pain points and understand their goals and needs for self-education.

I prepared a screener survery to capture my target audience for an interview. The target audience would display motivation for learning music and have little to no experience.
Out of 15 participants, only 3 met the criteria and were willing to do the interview 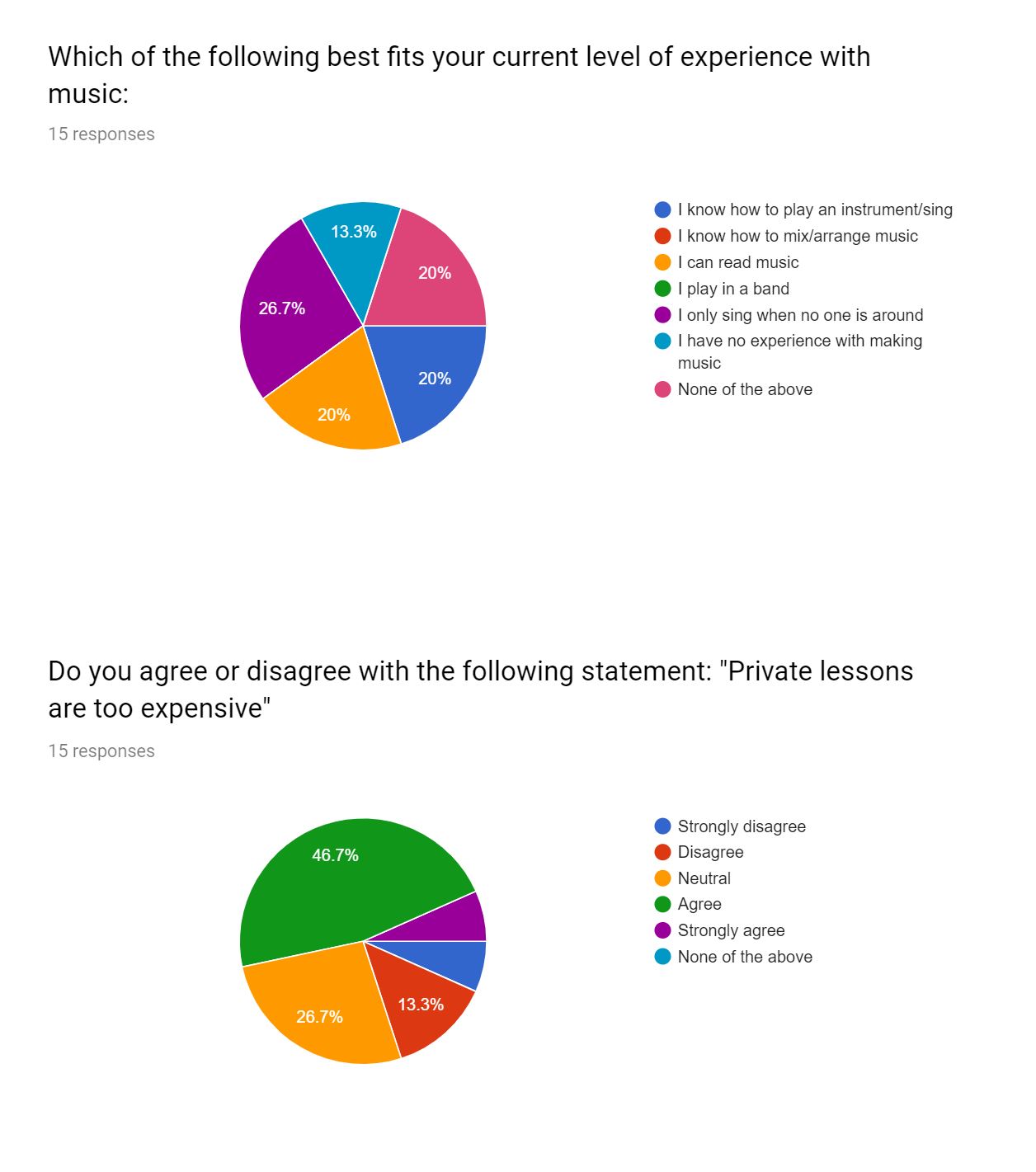 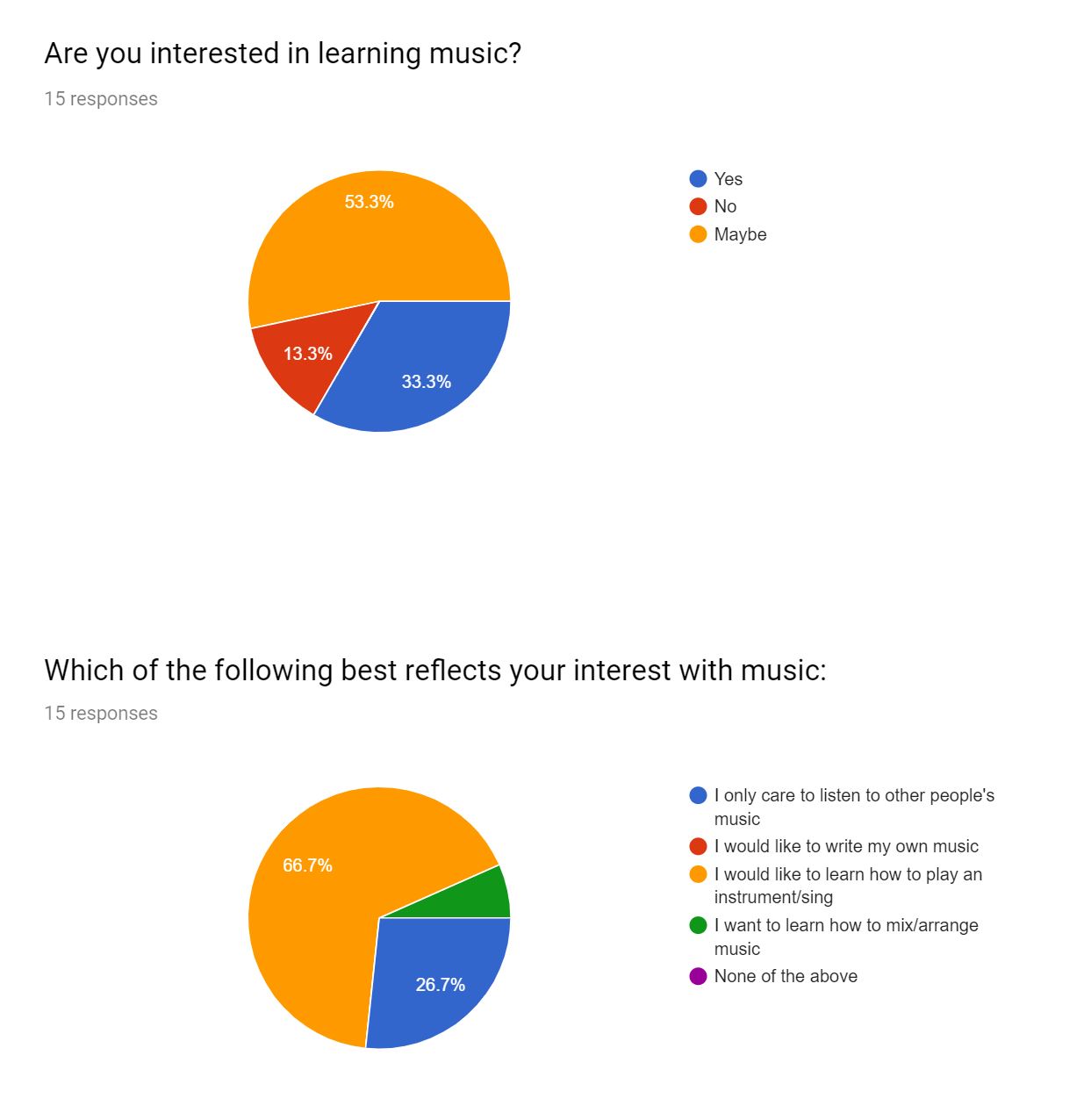 After I completed the interviews, I analyzed the information and identified the critical components to synthesize the data into a diagram that showed me the similarities between the interviewees.
The major points that I identified were: 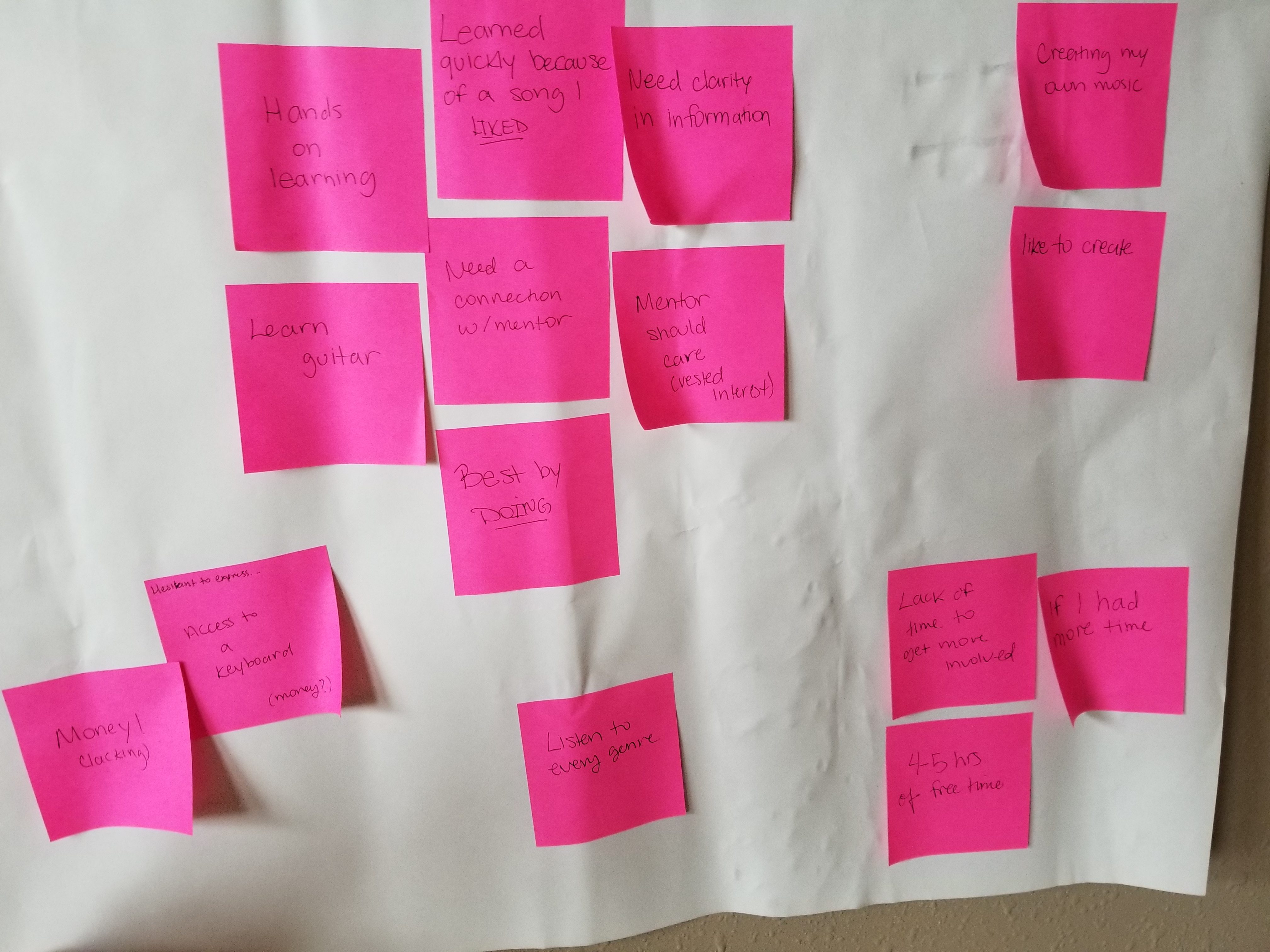 With the information from the diagram, or affinity map, I was able to define my target audience's goals and needs.
It also allowed me to create the study persona Maurice Salvatore, who represents that synthesized data.
Maurice is a a father of two who has a desire to learn music, but can't seem to fit his passion into his schedule due to other priorities. His motivation to learn how to play music stems from his desire to play his favorite song as well as his children's. 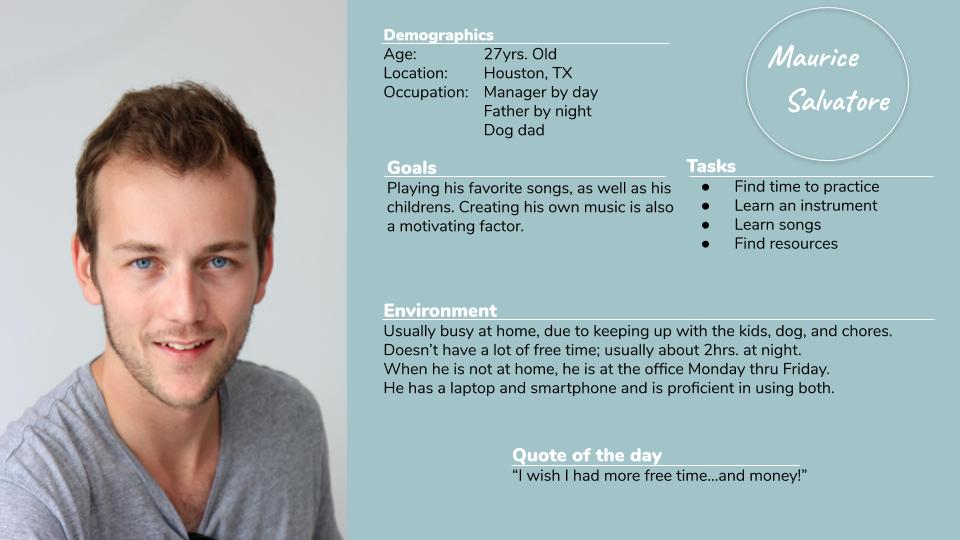 Having solidified who I was designing for, I was able to create stories, based on my user, that would display the steps that Maurice would take to reach his goal.
I started by restating Maurice's goal: Learn to play his favorite song as well as his children's.
Then, I proceeded by structuring his goal into a user story statement:

As a user, I want to learn how to play an instrument, so I can play my favorite song and my children's

With this statement, I could begin building the process, step-by-step, that Maurice would need to take to reach that goal.
Once I was complete I was able to identify the components that my app design would need. 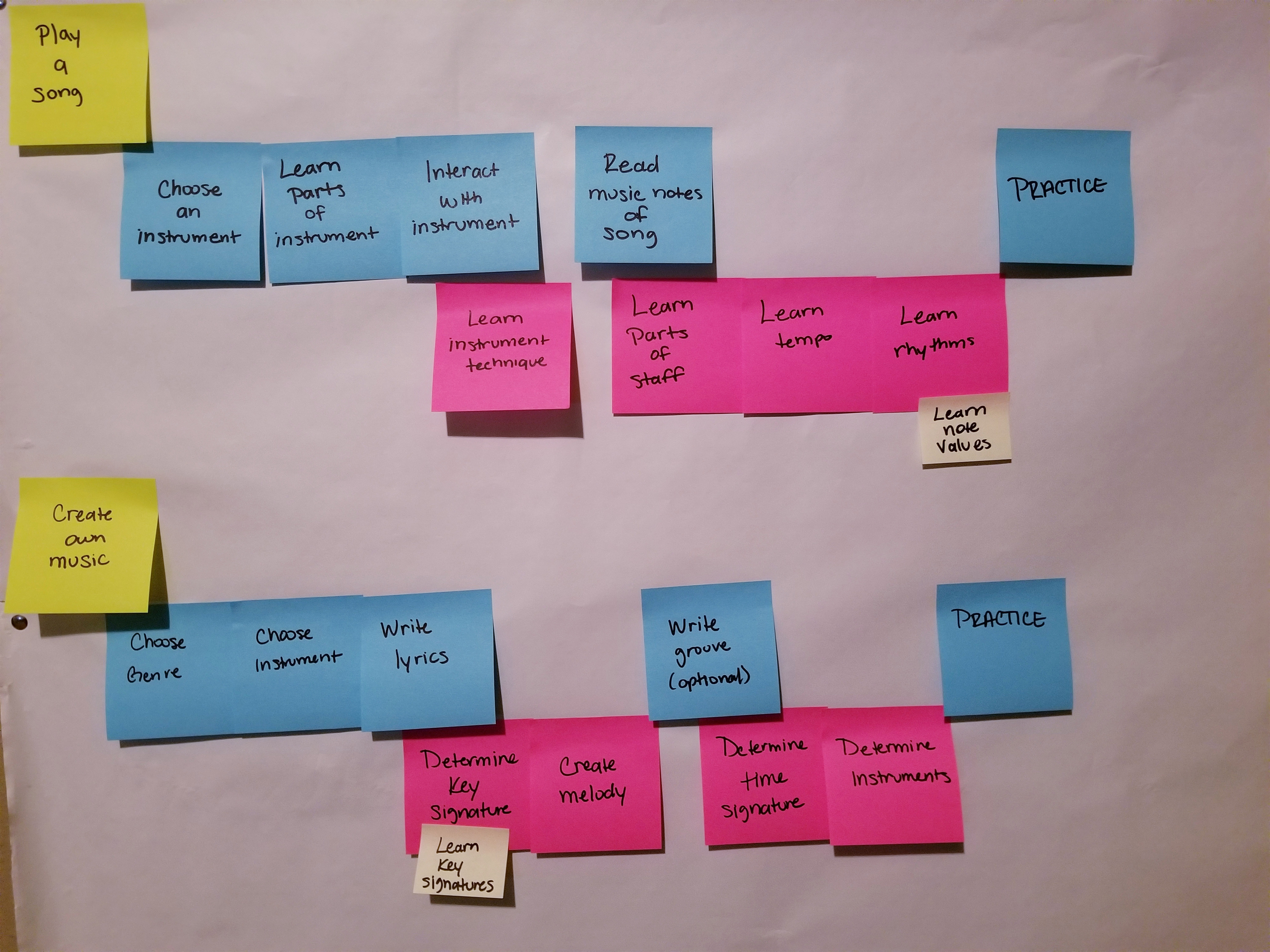 With the user story fresh on my mind, I decided on visualizing the specific actions that Maurice would take.
How would Maurice move from one screen to another and what functions/actions should be available to him?
Understanding this flow would lay a foundation for the app screens that would be needed as Maurice progressed towards accomplishing his goal. 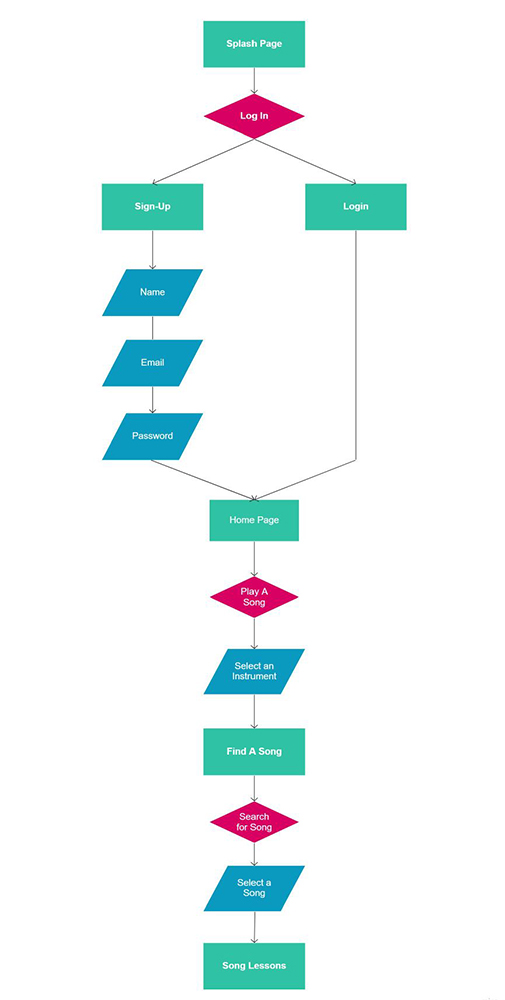 I realized that the way Maurice would flow from screen to screen would be based on making selections as opposed to, for example, reading content.
The screens should have clear options to be selected and not cause any hesitation, or doubt, of the action required of Maurice for him to have a smooth experience in beginning a lesson.

Now that I knew the screens that the app needed, along with an understanding of how they should function, I could begin sketching out how all of this might look like. 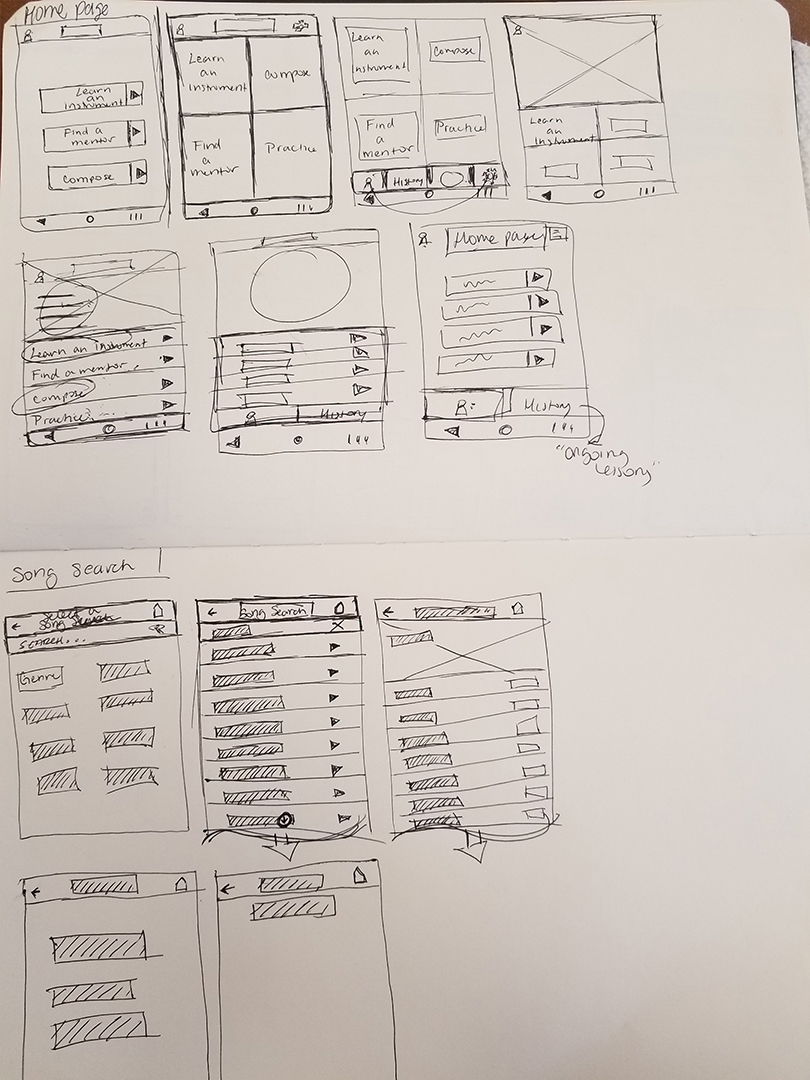 I evaluated the effectiveness of my sketches and selected a few to get feedback through what is known as guerilla usability testing. I presented the sketches to people and asked them a few questions, while they viewed them, to gain insight into their effectiveness. I wanted to identify anything that was unclear, or left them feeling confused, so I could revise the idea before moving on.

With the revisions made to my sketches, I opened up Adobe XD to begin building Musigo.
I began with wireframes and after reviewing them, created a low resolution version of how Musigo would look like.
My goal with this project was to be able to put together a proposed design layout for the app, which did not involve choosing UI elements, such as color, typography, etc.

My proposed design, however, did take into consideration the hierarchy of elements as well as incorporating UI patterns that users may be familiar with based on other similar app designs. This would help the user not feel like they had to learn a whole new tool, but rather would be able to understand the elements and their functions to be able to make decisions with ease.

Reflecting on this project, I could've incorporated some more research on how other self-education platforms (like Coursera or Skillshare) designed their mobile experiences. Reducing the work on the user to learn new functions and interpretations of elements would aid in allowing users, like Maurice, to make decisions easily and swiftly.
Liked this project?
Send me an e-mail so we can start working together.
Contact